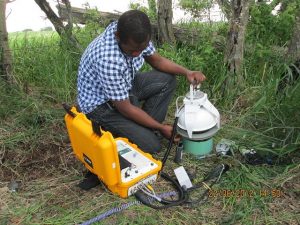 This project aims to quantify the carbon sequestration potential and rates of greenhouse gas (GHG) emissions in three agroforestry systems. The research will be done in Alberta across a soil-climatic gradient, and is therefore regional in nature, but we expect the results of this work to be applicable across a broader area of western Canada where similar soil-climatic zones occur (e.g., in the prairie provinces). A large number of plots will be used to account for spatial variation in ecosystem responses.

This project has 7 research objectives:

1. To determine the contribution of vegetation vs. soil organic carbon storage at the ecosystem level within three agroforestry systems (planted shelterbelt, hedgerow and woodland systems) and adjacent agricultural land (cropland and pastures).

We will measure carbon stores in woody and herbaceous vegetation, litter, soil and plant roots. These measurements will allow us to determine the vegetation and soil reservoirs for carbon storage at the ecosystem level within each contrasting agroforestry system.

Greenhouse gas emissions (including carbon dioxide, methane, and nitrous oxide) will be measured with static gas chambers. Gas sampling will be done once every two weeks during the growing season and once a month during the non-growing season, including winter (a period increasingly being recognized as an important one that contributes significantly to the annual GHG emissions). Gas samples collected from the field will be analyzed with a gas chromatograph. The GHG emissions will be measured for multiple years to quantify interannual variability. The autotrophic vs heterotrophic respiration (carbon dioxide) rates will be determined for each of the agroforestry systems under study as well as the controls, using a modified trenching method. Soil temperature and moisture content at the surface soil (0-10 cm) will be monitored continuously along with other environmental variables to enable modeling of gas emission rates.

4. To investigate the distribution of soil organic carbon with depth and how such distribution patterns vary among different agroforestry systems, as well as across soil-climatic zones.

We will conduct an intensive sampling of soil profiles in each plot and determine soil bulk density by depth intervals. We expect to see greater distribution of soil organic carbon at deeper depths within the agroforestry systems as compared to conventional agricultural systems. Finally, the relative contribution of trees and grass species to organic carbon accumulation will be evaluated with the 13C composition of soils from each plot. This method will allow us to gain an understanding of the historical rate of carbon sequestration in different land use systems.

Soil aggregation and soil carbon stability can be affected by the inclusion of trees in a land use system. We will use three methods to evaluate carbon stability: i) examine the distribution of soil aggregates ii) using a laboratory incubation method to evaluate the response of soil carbon in different size fractions to temperature changes, and iii) by modeling the relationship between GHG emissions in the field with soil temperature and moisture content.

6. To evaluate if there are any advantages of the three different agroforestry systems for sequestering carbon and reducing greenhouse gas emissions across three different soil-climatic zones.

The carbon balance in the six respective systems (three agroforestry and their respective agricultural systems for comparison) will be evaluated. The global warming potential of each system will be calculated based on the greenhouse gas emissions data. This will allow us to assess the carbon benefit or cost of the systems under study.

7. To identify potential opportunities for C sequestration by agroforestry systems, including implications for future economic C offset programs, for producers in western Canada.

With the collected data we will be able to compare the three different agroforestry systems advantages for sequestering carbon and reducing greenhouse gas emissions. Working with economists, this information can then be used to identify new opportunities to reward agricultural producers for BMPs associated with retaining and/or establishing agroforestry systems, much like carbon offset payments that are currently available for reductions in soil tillage.